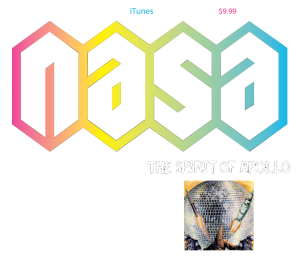 Hey what’s poppin’ peeps! So, for the last month or so, I’ve been bumping the highly anticipated album from this North American & South American (hint…nasa) DJ duo! It’s off the hook for sure! I mean, come on…the list of featured singers/rappers/producers/musicians is ridiculous in itself. Most surprisingly, you end up getting sucked in and entranced by the tracks just as equally or better! I mean, the various styles of music seamlessly flow into one another when layered on one jam, or blending into the next track listing…it’s all good in the hood! Definitely a DJ/Producer’s album…one that you rock on your own, or blow the whole damn club up with! DJ iPizzle has already been blending these grooves into his arsenal, so watch out Westside LA! Oh, speaking of LA, they did this album in a lil’ crackhead studio that they have up in North Hollywood or something. It goes to show, with the right type of talented ears, some sweet home studio equipment, and a vision (well, this one took about 5 years to complete….but well worth it), you can be just as dope as any of the major labels that feed some of these guest appearance types.

Oh, and by the way….who has the juice to pull High End talent such as Kanye West, Santogold, etc. I mean, come on, David Byrne (talking heads) is even down! Hat’s off to NASA…you just made a fellow musician/dj’s SPRING with this one…raise your glasses and get out on the dance floor!

Check out video below.  You can also click the album logo above for Myspace.